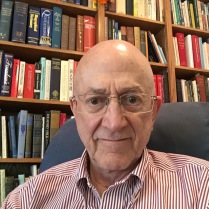 Dr. Johnson was born in Caldwell, ID in 1942. He is an alumnus of Washington State University (B.S., 1964) and the University of Washington School of Medicine (M.D., 1969). His first career was in internal medicine (residency Beth Israel Hospital, Boston, 1969-71, Chief Resident 1972-3) and in cardiology (fellowship in cardiovascular diseases, Massachusetts General Hospital, Boston, 1971-74); he practiced the latter at the Massachusetts General Hospital, Boston for a decade and then in Walla Walla, WA for nearly two decades, retiring in 2001. During his career in cardiology he published scientific articles and book chapters and edited a popular textbook in the field. In Walla Walla he was co-director of the Intensive Care Unit at St. Mary Medical Center, serving with his partner in practice, Dr. Ralph Richard Rampton; and he was an active member of the committee for acute trauma care at that hospital.

Within a few years of retirement, Dr. Johnson became restless enough to commence specialty training in another field of medicine, psychiatry (residency Thomas Jefferson University Hospital, Philadelphia, 2004-7). For the decade after its completion, he practiced general psychiatry privately in Walla Walla. His (second) full retirement from practice began August 1, 2018. He has published four articles in psychiatric specialty journals. While in active practice, Dr. Johnson's special interest were mood disorders and personality disorders. His residency training in Philadelphia had been strong in psychotherapy, and, as a consequence, he carried out more psychotherapy himself, integrated when indicated with medication-management, than customary for psychiatrists in the Pacific Northwest. He also worked closely with a number of therapists, most especially Lara Riley, PhD and Mark Brown, EdD, Dr. Johnson served for five years (2012-2016) as a chairperson for the provider-wellness committee at Providence St. Mary Medical Center.

In collaboration with Thomas Alderson Davis, PhD, Associate Professor of Philosophy, Whitman College, Dr. Johnson has co-authored a book about the relationships of illness, beginning with catatonia, to concepts of self and identity: Story by Story: Who I Am, What I Suffer.